The Mystery of the Crook

In September 2016 a "Crook" was dropped off at the security building at the entrance of the campus.

But the library already had a Crook in its Special Collections.

Which Crook is the real Crook, if either? And what role did the Crook play in Anderson College's traditions long before it became a University? 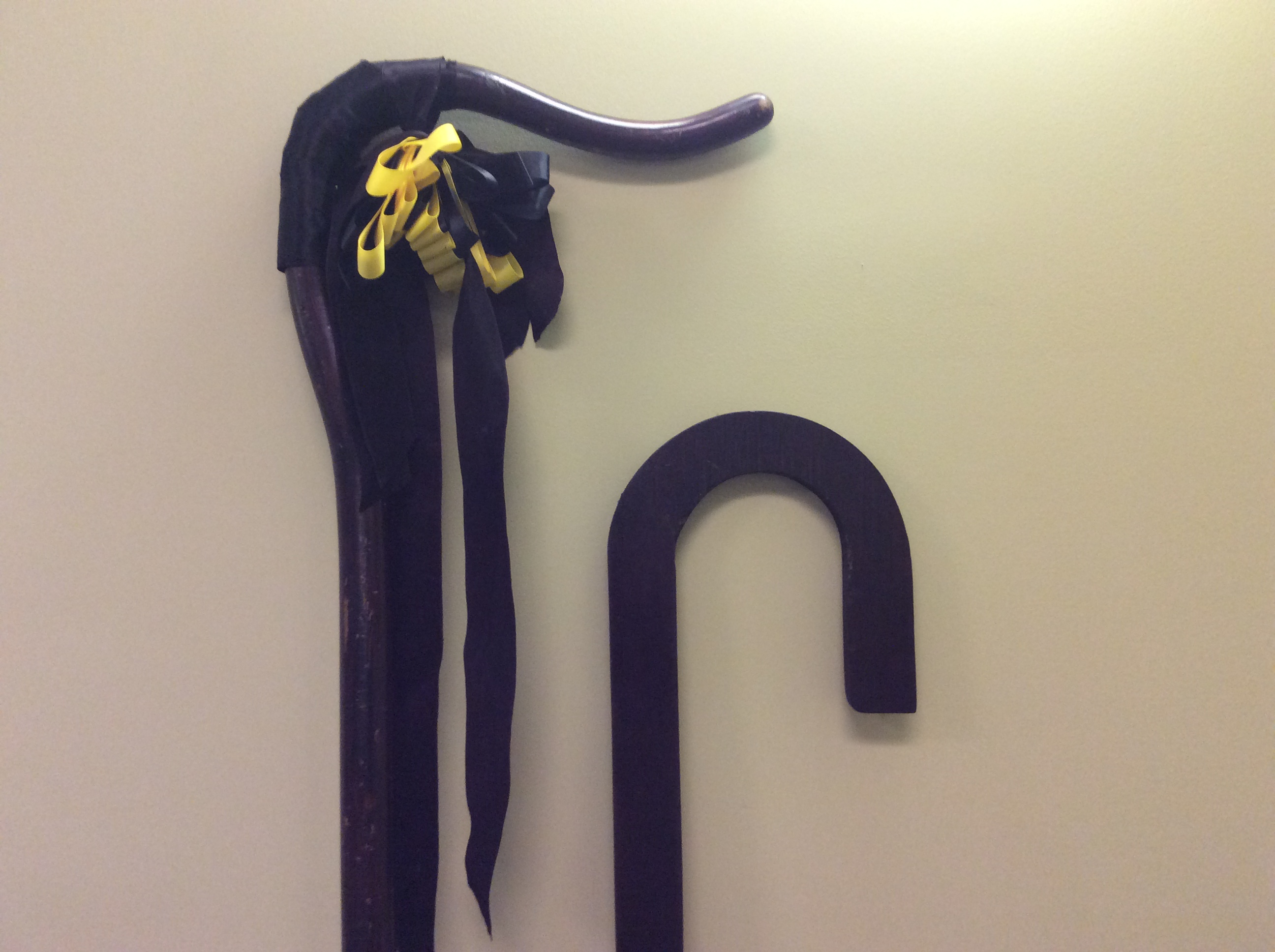 The Story of the Crook and its mysterious return…….An AU Halloween Story, by Joyce Wood, October, 2016

On Friday October 7, 2016, a crook appeared. A mysterious, generous benefactor brought the missing treasure to the Campus Safety Office without identifying himself….or where it has been for the last 50 or so years!!!

So what is this crook? It is a shepherd’s crook that has been part of the historic traditions of Anderson College before it became Anderson University - going back to the very earliest years of the school’s existence in the early 20th century. According to History Professor and alumna Pat Mulligan (now retired) the first crook was introduced by a student who became lost in the woods behind the school at the time and saw the crook lying on the ground pointing the way back to the school. It became part of campus lore during the 1920s and 1930s when it was the focus of competition between the classes. This competition started with a Halloween banquet at which the crook song was sung, and the rules were read (for example it had to be hidden on campus and had to have about 6 inches showing). The Senior class received the crook first and would hide it; the other classes would search for it and when it was found, then hide it in turn. It was important that the Senior class find it by the end of the academic year or be very embarrassed. When the conversion to a two year Junior College format took place in 1930, that position was then taken by the Sophomore class. A duplicate crook was created in order to preserve the original which was kept in the Dean of Women’s office.

This friendly rivalry continued until the 1960s when the duplicate crook disappeared and the tradition faded.  The last Halloween banquet at which the crook was presented took place Oct.  31, 1961 - a date commemorated on the returned crook by a plaque. A copy of the Anderson College newspaper, The AC Echoes, dated October 25, 1961, describing the Halloween banquet, accompanied the crook along with several other documents from Anderson College in the early 1960s. Anderson College has long had a ceremonial crook which is today on display in the archives: it has a lovely mahogany finish. At some point, however, that crook was broken and tied together by ribbons.   The hiding crook that disappeared has been the subject of wistful speculation as to its whereabouts.

According to Charles Wooten, alumnus ’67 and later Dean of Students in the early 1970s, the hiding of the crook had become a Christmas tradition; by the time he became Dean of Students the tradition was no longer being observed. Prof. Mulligan noted in her history of the crook tradition published as an article in the school’s newspaper, The AC Echoes, that the traditional launch of the class rivalry was moved to the Christmas season in 1965 to avoid the Anderson College beauty pageant that was also held in October.
The curiosity about the crook rose again on Oct. 7, 2016, when one was brought to the Campus Safety Office by a mysterious individual who did not leave his name but instructed that it be delivered to the Dean of Women.  That would have been the office that would have housed the crook until the 1960s; that position, however, no longer exists so it was delivered to the Anderson University Special Collections for safekeeping.

Note: both Prof. Mulligan and Dr. Wooten looked at the newly arrived crook around Oct. 10-11, 2016, and did not recognize it.  Prof. Mulligan’57 noted that the crook was a natural wood color while she was at Anderson as a student; the tradition was no longer practiced when she came back as a faculty member in the early 1970s, the same information reported by Dr. Wooten ’67 and by Dennis McKee who joined the Physical Plant staff in 1978 (conversation October 24, 2016).
The 1956 B&W photograph of the crook in The Yodler shows it as white in color.
Dr.  Bob Hanley, the former Dean of Student Development, in a conversation on October 28, 2016, noted that the tradition saw a short-lived revival when Anderson College became a baccalaureate institution in the early 1990s.