About the Library: Extended Hours Experiment - 2013

Contains information on the library's hours, check out policies, rules, and services

The Thrift Library is open seven days a week for a total of 86 hours.

Hours are determined by usage. The library makes regular half hour counts of the number of people in the library, particularly around opening and closing, and retains them for analysis.

When we detect a trend, we experiment with longer hours, and our users are given the opportunity to "vote with their feet."

Over the years there have been multiple experiments with longer hours which have resulted in the expansion of hours on several occasions, the most notable of which was from 11:00 to 12:00 Sundays through Thursdays.

The 1:00 Experiment - and Fridays - and Saturdays

Beginning the first Sunday in November, 2013, the library experimented with 1:00 closings - Sundays through Thursdays. Although extended hours continued through the end of Exams, the results were compiled separately.

The experiment was prompted by a rise in the number of people in the library from 11:00 pm to midnight. It was hoped that 1:00 closings would encourage students to stay later, and might even attract late arrivals.

Additionally, the library experimented with longer hours on:

NOTE: The trials were limited to our busiest time of the year - November / December - to ensure the highest possible counts. Had they been conducted in August / September, the results might have been half as large. Except for the occasional spike around midterm, attendance increases throughout the semester and peaks in November / December.

Results of the 1:00 Experiment

The results of the 1:00 experiment were significantly lower than expected with an average count of only 17, a number much lower than even 1% of our student enrollment.

The single highest count recorded was 30 and the single lowest count was 2.

Results of the Friday Experiment

The library extended its hours on Fridays till 6:00 p.m. beginning November 8 and running through the end of the semester. The average number of users in the building at 5:30 was 15.

There were three surprises.

The lack of consistency in the results suggests that we may need to repeat the experiment over a longer time period and look more closely at our counting methods and results. It is possible that the numbers spiked due to outside influences such as faculty committee meetings and/or the presence of tour groups iof prospective tour groups, or even by community users.

Still, the count was significantly less than even 1% our our enrollment.

Results of the Saturday Experiment

The library extended its Saturday hours from 11-5 to 10-6 from November 2 till the end of the semester. Attendance was disappointing, not only during the extended hours, but throughout the day.

Although we do not intend to cut Saturday hours, the unintended consequnce of the study was that attendance is so disappointing that the argument could be made that it is not worth opening the library on Saturdays until after lunch - if at all. Consider, when you look at the results, that the experiment was run during the busiest time of the year.

On an encouraging note, attendance during Exams was more than twice that of the general semester, averaging 28 vs.12 over the entire day and 11 vs. 5 at 5:30

The number of students in the building at 10:30 a.m. was 3 for both the general semester and exams. The expectation that students would take advantage of earlier Saturday hours during exams proved false.

Although not part of the extended hours experiment, the library always closely watches attendance during exam hours  - especially around opening and closing times.

Generally speaking, attendance during exams was 20% higher than that of the general semester - averaging 59 vs. 47.

Attendance during exams at 12:30 am was twice as high that of the general semester - 32 vs. 16, suggesting students don't necessarily wish to study late on a long term basis, but will do so when the need arises.

The experiment demonstrated that the Thrift Library's general semester hours are adequate.

The experiment demonstrated that the Thrift Library should continue to expand hours during Exams till 1:00 am, Other expansions - Fridays and Saturdays - were disappointing, though later Friday hours showed promise and may be a future possibility.

We will continue to count attendance every half hour and experiment again in the future. 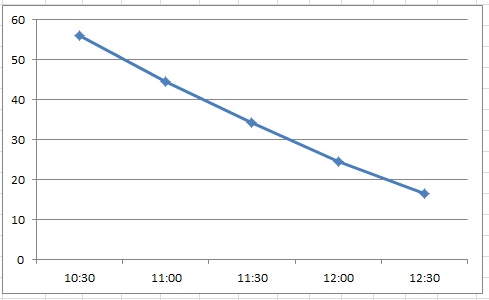 Average Half Hour Count - All Hours 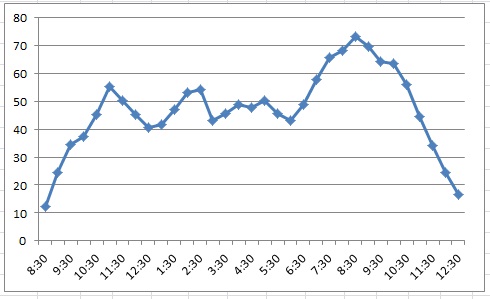 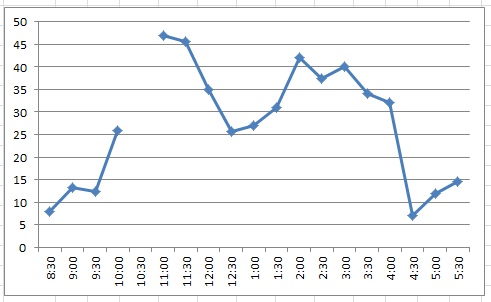 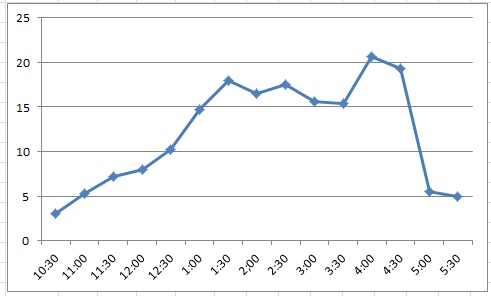 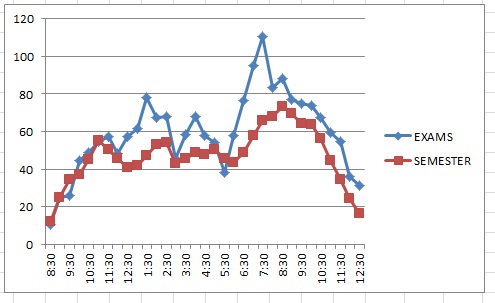